Piracy exists outside the law and continues to grow every year. As political conflicts increase the situation is set to get worse, creating new and potentially dangerous risks to manage

As businesses around the world assess their prospects, one industry at least can be confident that 2011 will be another bumper year: piracy.

Attacks at sea hit an all-time high in the first three months of this year. There were 142 attacks worldwide, with 97 of these off the coast of Somalia where, with no central government, pirates are free to operate at will. The country, which fronts onto some of the most valuable shipping lanes in the world, is rapidly becoming the world centre for piracy with at least 18 commercial vessels and around 500 hostages currently held by Somali pirates, according to Maritime & Underwater Security Consultants.

“This is a problem that will definitely persist in the near-medium term,” says Control Risks global issues analyst Karlin Younger. “There will be no solution until the situation on the ground improves. Whatever the international community or mariners do to protect themselves, the pirates shift their tactics and find new ways to stay in business. They react. They read what people are writing about them in the media. Plus, the pirates now operate over such a huge area, it’s almost impossible to police it properly.”

Even where naval forces do engage pirates, their hands are often tied. “The legal framework for the military is not helping,” says Global Risk Solutions’ Sean Woollerson. “They often have to operate a capture and release policy. Plus, it’s not a crime to be sailing around with a few guns. A lot of fishermen have guns – if only to protect themselves from pirates – and it can be hard to identify the aggressor. It’s a constant frustration for commanders when you talk to them; there’s no courts or jails to accommodate the pirates, no judicial infrastructure.”

“There is a lack of political will to do anything; a lack of appreciation for the importance of the issue. Unfortunately, I think there is a dim view of mariners: if we were talking about a couple of 747s being held hostage then the reaction would be, I think, quite different.”

The pirates have been quick to take advantage of the situation. One recent tactical shift is the use of ‘mother ships’, large vessels that are used as a base to launch multiple attacks, re-supply and conduct hijackings. “These vessels – often hijacked themselves – greatly increase the amount of time pirates can stay at sea,” says Younger. “They are also less reliant on good weather.”

In addition, the remarkable success of the pirates – and the reporting of high ransoms in the global media – has attracted more aggressive criminals from across the region, which some analysts blame for a recent increase in violence towards crews. In 2011 hostages were executed for the first time, and released hostages are increasingly reporting torture and mistreatment. 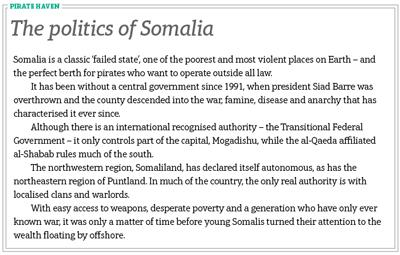 But the main driver of piracy – the issue no-one wants to talk about – is the increased ransoms being paid to free captive seafarers.

“The key issue is: should there be payments?” says Maplecroft associate director Anthony Skinner. “No one is willing to discuss this, but ultimately it is ransoms that are perpetuating the problem.”

With so much money at stake, some see piracy spreading to the other side of the Gulf of Aden as the political situation in Yemen deteriorates and the country becomes increasingly lawless. “It bodes ill for a potential solution,” Skinner says. “While the vast majority of pirates are from Somalia, Yemen is becoming an important factor.

“Although the responsibility does really lie with the shipping companies to manage this, it is a matter of international concern. Although the pirates themselves are not ideological, there is evidence that al-Shabab in Somalia are ‘taxing’ pirates for a safe berth and that money is effectively funding Islamic extremism, which potentially has a global security dimension.”

But for the moment, industry is shouldering most of the burden. “For businesses it’s a triple whammy with rising premiums, longer transit times and the costs of additional security,” Younger notes. 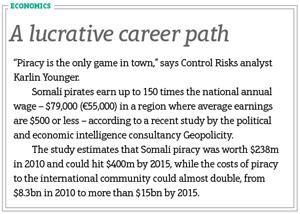 However, for all the dangers some argue that cool pragmatism will win the day: “Piracy is just another risk that needs to be managed and planned for,” says The Morgan Crucible Company’s director of risk assurance, Paul Taylor. “I would not want to get it overstated. There are dangers but also ways to prepare.

“With retail increasingly sourcing huge amounts of goods from Asia, whether it’s clothes or iPods, the potential for disruption could be considerable, especially if it were a Christmas supply,” notes Taylor.

“However, there is a lot of good information out there and risk managers should very quickly be able to look at the risk to their companies, and then the task is to work out how to mitigate that risk. They should be asking what routes ships are taking and potentially look at breaking up the cargo over different vessels to spread the risk. There are a lot of preventative measures you can take and good crisis prevention training available.”

In short, be prepared. Whether it’s by installing water cannon and razor wire, or scrutinising contracts and thinking tactically, all businesses with an interest in the Gulf of Aden need to realise that the Jolly Roger will be flying high for some time to come. SR

01: Piracy attacks are at a record high, with 70% taking place off the coast of Somalia

02: Average annual earnings in Somalia are around 350 euros, making piracy an attractive option

03: The main driver of piracy is the increased ransoms being paid

04: There is limited political will to tackle piracy, which means private companies are left to take action

05: Businesses with interests in the region should consider ways to lessen the risk of piracy attacks