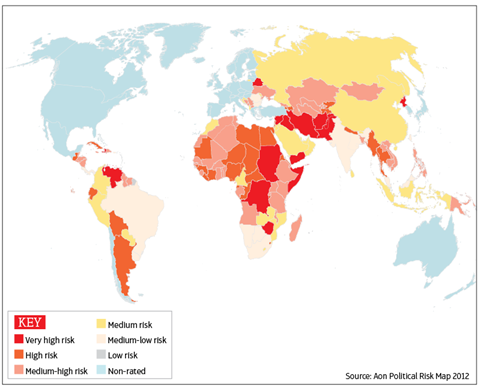 Political violence cover is the new must-have accessory for international companies, according to broker Aon. More and more businesses are extending their insurance coverage as doing business abroad continues to become increasingly risky, claimed the broker.

Terrorism insurance is already a mature market, but there is a growing desire from businesses for cover against political violence as they rush to protect themselves against the rising number of civil events taking place across the globe.

Aon published its annual Terrorism and Political Violence Map (see image) last month to help businesses gauge the threat level of countries around the world, and identify the most appropriate forms of cover when operating in those territories.

In the past, around 80% of customers were just buying terrorism cover, but in the last three years most of those are also buying political violence coverage

Increasingly, companies are looking for broader protection that covers them for the threat of political violence. “In the last three years there has been a significant shift where customers have been looking to broaden the scope of their cover to more than simply terrorism,” said Aon head of terrorism Neil Henderson.

He added: “In the past, around 80% of customers were just buying terrorism cover, but in the last three years most of those are also buying political violence coverage. So there’s been a significant shift whereby companies that have exposures in these countries are looking to broaden coverage.”

In this year’s political risk map, 37 countries were downgraded, largely owing to civil unrest. Staggeringly, 43% of the downgrades are attributed to austerity measures being implemented throughout Europe, with the UK, France, Germany, Italy, Portugal and Spain all downgraded from low to medium risk.

Civil disorder
Risk Advisory managing director Dr David Claridge said that it “was the first time since the map’s inception [that] we have recorded significant negative ratings in Western Europe”, and that this reflected past and ongoing civil disorder.

He added: “With further austerity measures still to be imposed and the eurozone crisis only in remission, economic and social degradation are likely to be important drivers of future unrest.”

Threats to stability in the Middle East continue to pose major risks to business in the region, while terrorist activity in Africa contributed to six
countries being downgraded there. Only seven countries were upgraded, including Australia, Ivory Coast, Egypt, Macau, Macedonia and the Netherlands.

Whether they’re drawn by foreign appeal, or are simply moving away from stagnating home markets, businesses continue to move abroad where they may encounter challenging political situations or existing conflicts.

But it’s the increase in the frequency of civil incidents and heightened political turmoil that’s likely to be the primary driver of growth in the political risk insurance market, which is already reportedly worth about $650m (€510m), having doubled in the last three years.