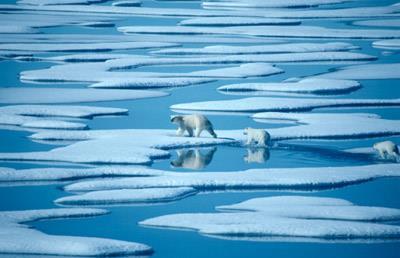 Man-made climate change has contributed at least 70% to the rapidly falling levels of sea-ice around the Arctic, a study has revealed.

The figure is much higher than scientists had previously predicted and could be as high as 95%, according to climate scientists at the National Centre for Atmospheric Science at the University of Reading.

“Since the 1970s, there’s been a 40% decrease in the summer sea ice extent,” said Jonny Day, who led the study. “We were trying to determine how much of this was due to natural variability and therefore imply what aspect is due to man-made climate change as well.”

Day tested the hypothesis by running simulations of how the Arctic ice-levels might have changed since 1979 without the effects of greenhouse gases resulting from human activity.

“We could only attribute as much as 30% [of the Arctic ice loss] to the Atlantic multi-decadal oscillation (the pattern of natural climate change),” said Day, adding that this “implies that the rest is due to something else, and this is most likely going to be man-made global change.”

Studies had indicated that human activity had contributed no more than 50% to the declining ice-levels, but Day’s study found that natural variability may have contributed as little as 5% to the problems. In addition, the study suggested that the Arctic could become ice-free in the summers from as early as the late 2020s.

Levels of sea-ice around the Arctic have been declining sharply since the 1990s and, while the loss of ice has opened previously inaccessible areas for drilling and new shipping routes, the trend is having adverse effects on wildlife.

“When you have less ice, it means there’s more open water and therefore the ocean absorbs more radiation and will continue to warm,” said Day. “It’s unclear what will happen – it definitely seems like it’s going in that direction.”

The figures come in the wake of unprecedented melting over the Greenland ice cap, and will further fuel debate surrounding the extent of man-made climate change.

Are the current high levels of sea-ice loss due to natural variability, or are we starting to see acceleration in the effects of man-made climate change?