Difficult road ahead to recovery

Although Italy’s economy is not in as critical a state as analysts had anticipated, the country will have to navigate its way past various obstacles on the way to financial and social stability 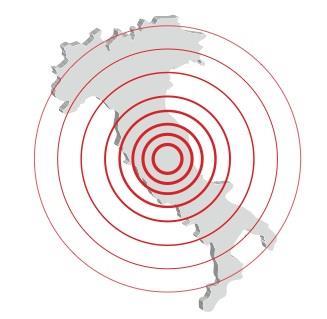 Italy’s economy continues to struggle - despite signs of moderate improvement. The country has so far avoided plunging into a financial abyss, but it remains on the edge.

The Italian economy is shrinking less than many analysts predicted however, it still contracted by 0.2% in the quarter to September as the country’s fourth recession since 2001 entered its second year. This represents a reduction of 2.4% on a year ago. Mario Monti’s technocratic government remains committed to austerity with the aim of stripping back public debt by a massive €2 trillion, or 120% of Italian GDP.

So, while the eurozone’s third largest economy may not be in the same position as Greece, Spain or Portugal, it can still expect tough times and substantial social and economic turmoil ahead. This will be the case even in the absence of catastrophes, such as floods and earthquakes.

So, what are the main risks on the rocky road to recovery?

Earthquake exposure is a real issue, particularly in reference to the L’Aquila damage.

Prysmian Group group risk manager Alessandro De Felice says: “These events hit a lot of small- and medium-sized businesses that otherwise might have been doing well and exporting well.”

These firms often lack the formal risk management culture that is present in larger companies. “They are strongly exposed to earthquake risk, and this is not mitigated by proper loss control,” De Felice says.

“In the past few years, we’ve seen some very, very concentrated rain storms,” says De Felice. “In Italian we call them ‘bombs of water’. Are they related to climate change? It’s impossible to say. Maybe they are. The time period we are able to study in any real detail is impossibly small compared to the age of the earth, but we must be open minded.”

Over the past few years, almost unheard-of snowfall has occurred in Rome, as well as heavy rain and associated flooding in Tuscany and Liguria.

“As a result, we saw the collapse of logistics in the centre of the country,” De Felice says. “The roads were locked up for a week or more. We had 3m or 4m of snow in central Italy and none in the Alps, which has affected the skiing industry. We’ve always had heavy rain in autumn, but this is new.”

“At the moment, this is more of a perception than an actual risk, in that nothing is yet really evident,” De Felice says. “But there is definitely the potential for social instability if the economic crisis continues for another one, two or three years.” Until now, although Mario Monti’s government has passed many unpopular measures, the general situation has remained stable. “There is nothing like the situation of Greece, or even Spain,” De Felice says. “But with the possibility of unemployment rising further, it remains a worry.”

Italy is historically a country where payment terms are more favourable: they are stretched over a longer period than much of the rest of the world.

However, “there is a question mark on this if the economic crisis develops further”, De Felice says. “Banks may be hit and there may be a deterioration of available credit, which would hit small- and medium-size businesses hard. They are 90% of the Italian economy.”

Third-party liability cover has increased, particularly in the utilities sector.

“There has also been a rise in class actions and this may increase the exposure of companies doing business in consumer goods and their relationship with their investors,” De Felice says. “Recent changes have also made professional indemnity insurance compulsory for many professionals, including doctors, lawyers and financial consultants. This is also related to the rise in class actions.”