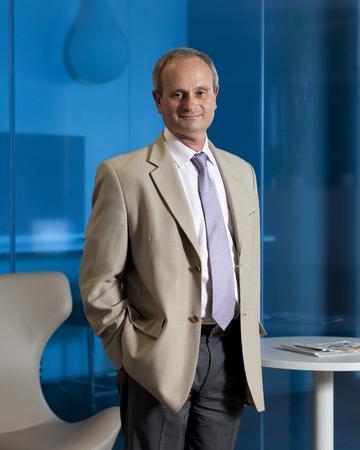 After graduating from the École Centrale de Lilles in 1981, Dennery began work as an engineer. Yet, despite this technical background, it is probably his experience with the media that has had the biggest influence on his approach to risk management.

“I had three different operational engineering jobs, after which I wanted to get involved with the corporate side of the business,” he says. “So I was given the job of managing the press service at EDF.

At that time I understood how risk management was connected to communication and PR. The risk officer’s role is to anticipate the unexpected and that’s one of my key roles now

I had to manage several different media crises, and every time you prepare a press release you anticipate a reaction from the press and the public, which has key parallels with risk management.”

Dennery held the position of head of media relations at EDF for three years, and during this time he spoke at a seminar on business communication in 1996. The event was organised by Thierry van Santen, another prominent figure in the French risk management community, who was developing risk management at the French food group Danone.

“At that time I understood how risk management was connected to communication and PR. The risk officer’s role is to anticipate the unexpected and that’s one of my key roles now,” Dennery says.

After being inspired by Van Santen, Dennery returned to his work in operational management but he continued to actively study the discipline of risk management. This work culminated in an extensive report on global risks in 2000.

“I had hired an intern and we began to work on a method for a global approach to risks,” he explains. “We worked with the research team at EDF and we contributed to the elaboration of the first method of global risk management for EDF.”

For Dennery, an informed understanding of risk allows companies to act with more conviction and to progress more quickly. “You have to develop strong convictions to advance and to undertake new tasks. You must always advance while being vigilant at the same time,” he says.
He believes that companies need to have a dynamic approach to risk and that over-regulation can sometimes leave companies more prone to disaster. “Organisations that have systems that are too rigid are cutting themselves off from reality, cutting themselves off from the reaction of the public, and sooner or later a catastrophe will take place. Certitudes can be very dangerous.”

Dennery often emphasises the positive side of risk. For example, touching on cyber risk, he says: “Cyber risk is often highlighted as a negative thing - and there is the real threat of hacking and of data loss - but there are also a lot of opportunities. The question for businesses is to know how to anticipate this new business and harness it, protect your brand image and your market share by using this new media to engage with clients and stakeholders. For me, there is also a generational or a cultural issue. I really have the impression that things are changing very quickly and that companies need to manage this change so they don’t get left behind.”

Dennery thinks his experience across various sectors and industries gives him the benefit of objectivity. This is essential to co-ordinate risk management for a truly global company like GDF Suez.

For example, Dennery believes pension risk is a manifestation of a more general problem: that of the distribution of wealth. “In a region that is developing economically, such as Europe in the roaring ’20s or Asia now, the cost of looking after society is relatively low, so you can increase funds going to social welfare. When the economy plateaus - which is the case now in Western countries - we no longer have the economic growth to finance the cost of social welfare.”

The challenge is now for governments, and also companies, to address the imbalances that exist in the economic system, he says. “If this social cost is impeding economic growth, you have to find a new balance in society without having huge reductions in the public sector.”

Dennery repeatedly stresses the importance of anticipating risks and effectively planning to mitigate future threats. One of the key emerging risks he identifies is the sustained increase in the price of commodities.

“We’ve seen the prices of metals almost double in 10 years. The price of crops such as wheat and corn has increased significantly. In terms of energy, before the economic crisis the price of oil had risen to $150 or $160, but today the global demand for all kinds of non-renewable resources has seen a huge increase because of demand from economies that are no longer emerging, but have emerged.”

A series of major demographic shifts have already occurred and risk managers need to understand how these changes will affect their companies, he says. “In China there are 300 million people who have a standard of living that is comparable to that of western economies; 300 million is the equivalent of the European population. This standard of living increases the demand for energy, water, metal and food. In the long term, there is a real question around price level and the profitability of business activities that are dependent on these primary resources.”

Like many risk managers, Dennery believes ERM represents the future of risk management. “The question today is to go further and ask companies to be more explicit about their risk appetite. Moreover, this is the goal of the green paper published by the EU and the 9th Directive on corporate governance. When we talk about risk appetite, we are talking about the development of the business, the appetite for business growth.”

However, for ERM to continue to establish itself in the corporate culture of companies around the world, a strong risk management community is essential. This is where Ferma can help, Dennery says.

“As professionals, it’s very important to be able to exchange ideas so we can improve risk management in our organisations and share new ideas. Ferma has developed a number of communication tools with social networks - there is a Facebook community as well as a LinkedIn community, and there are videos on YouTube relating to risk management. I really have been pleasantly surprised by the appetite that risk managers have to communicate with their peers.”

As for the future of his own industry, Dennery believes that renewables are important but that it’s the diversification of energy sources that is key. “Renewable energy will never supply enough power to meet all the world’s needs. We can’t really consider covering the world in dams, windmills and solar farms. However, when we can harness renewable energy, we need to do it; so we’re talking about 20% or even 30% of energy production. If we can do that, it will prolong our access to fossil fuels. This is something we have to do.”

The two key lessons, then, that other risk managers can learn from Dennery are the importance of managing relationships with the media and the ability to see the opportunities that are linked to risk.