The sheer numbers and complexity in car manufacturing supply chains make them exceptionally vulnerable. It takes a proactive approach to prevent production lines grinding to a halt 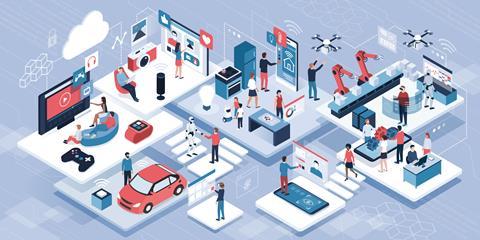 And many parts are brought from much further afield, often criss-crossing the globe as raw material is transported from a mine in Brazil, Australia or South Africa to a parts maker in China. There it can be turned into a bespoke cog or joint before being sent, to arrive just in time, at the company that designed it, often Germany, France or the US, where it feeds a vehicle production line.

Often, those components are the product of their own complex supply chain, in which parts are again delivered just in time, to save on warehouse space.

Every cog is vital

All this means that any little hiccup in supply, anywhere across the globe, can cause vehicle production lines around the world to grind to a halt.

“The risk is increased the more you spread the production of components across countries and continents,” explains Dr. Angelika Werner, senior innovation manager at Swiss Re. But she says carmakers are willing to take that risk to reduce manufacturing costs.

In the end, one needs to manage a multitude of suppliers – in many cases, producing the same type of components –to have fall-backs and emergency plans established in case something happens at one specific location

As a result, risks are reduced by contracting with a number of manufacturers, spreading the manufacture of single components across different locations. This minimises the chance of events disrupting production like natural catastrophes, explosions or fires.

“In the end, one needs to manage a multitude of suppliers – in many cases, producing the same type of components –to have fall-backs and emergency plans established in case something happens at one specific location,” Werner says.

The supply chain is vulnerable from three angles, as Werner sees it. First, an issue – such as a fire, accident or localised flood event – could halt production at a single supplier’s factory.

Alternatively, a whole region could be affected by a disaster like a typhoon or an earthquake.

The final vulnerability in the supply chain is down to transportation. Werner points to the devastating 2015 explosion in the Chinese port of Tianjin, which handles goods bound for more than 600 ports in 180 countries, as an example of transport proving a weak link in the supply chain. She notes that ports, where large shipments of parts can sit for days, or even weeks, were often ignored by those looking at risks to the supply chain.

How can you mitigate?

Werner explains that understanding and modelling those risks is the best way to mitigate them. That involves mapping the supply chain – down to street level – and stress testing it under various scenarios, in order to develop contingency plans.

Not only that, but she says firms are now using sensor technology to monitor shipments. Those sensors can detect and report damage to the cargo before it even arrives at the destination, giving the carmaker extra time to react by managing work arounds to the shortage or order replacement right away. Werner says that sensor technology also helps identifying whether large numbers of components are flowing through individual ports, creating trading knots in the supply chain, which could be avoided.

The next step, Werner says is to be proactive. “Sit down with risk management of the companies and talk about developing structured contingency plans, removing single dependencies and de-risking,” she advises.

Too often, the weak links in the supply chain are only spotted when they break.

“Disruption at a small but deeply connected supplier can reveal critical supply chain interdependencies,” says Anthony Monaghan, who runs broker Marsh’s manufacturing and automotive practice for the UK and Ireland. “Many companies have limited visibility into their supply chains and interdependencies, making it difficult to mitigate the connected risk.”

How do you insure?

And that makes supply chain risk notoriously challenging to insure. “It is increasingly difficult to underwrite supply chain risk in automotive manufacturing because of unprecedented influences altering the complexion of the industry,” says Jonathan Moss, head of transport at law firm DWF.

He says uncertainty from Brexit and the emergence of new technology is just adding to that difficulty. “The convoluted nature of automotive supply chains makes underwriting difficult, but these new influences add a growing layer of complexity forcing underwriters to evaluate supply risk, pricing risk, regulatory risk, geopolitical risk and counterparty risk.”