Getting to grips with the EU’s debt crisis 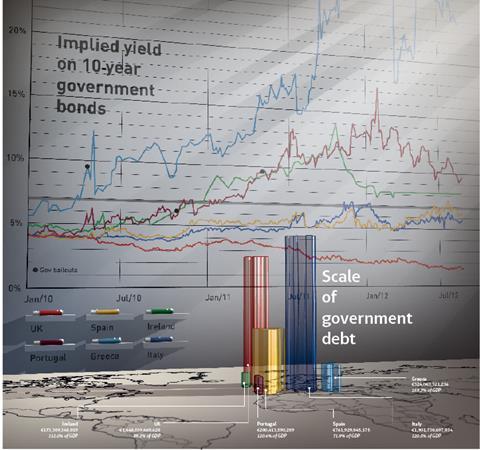 It is now five years since the collapse of the US sub-prime loans market, which started a chain reaction that became the worst economic crisis since the Great Depression. The effects continue to be felt, and nowhere more than in the eurozone.

The bust exposed flaws in the single currency concept. With member countries unable to react to the crisis unilaterally, scope for taking evasive action was limited. And, just as growth was powered by excessive lending, the financial
collapse was driven by unsustainable levels of public debt.

Greece wavered first. A late comer to the eurozone and a relatively insignificant player, in May 2010 it teetered towards bankruptcy. The ensuing bailout saw billions of euros loaned to the Greek government as part of a joint rescue between the EU and the InternationalMonetary Fund. The loan was conditional on the country cutting spending and raising taxes.

In November 2010, Ireland became the next country to seek financial assistance from its eurozone partners. It was forced to ask for help after the implied yield on its 10-year government bonds went through the 7% barrier. Beyond this figure, the rate is deemed to be an unsustainable level of return for governments.

Depending on perspectives, a ‘normal’ range for 10-year government bond yields is between 2%-5%, with the lower percentage rate indicating a country’s relative financial strength, stability and overall ‘credit worthiness’. Next, in May 2011, Portugal breached the 7% implied yield and sought a bailout.

The 7% figure has now become a key indicator of the financial instability of a eurozone country. Thus, speculation has been rife over the summer that Italy, Spain - or both - will soon be asking for financial help.

Spain on the cusp

At the time of going to press, Spain was on the cusp of seeking a bailout, but was resisting some of the conditions. Implied yields for 10-year government bonds for Italy and Spain have been above 7% on several occasions in 2012. The fact that both countries have hovered around that threshold for many months reflects ongoing market concern for their financial viability.

So why is the implied yield on UK 10-year bonds under 2%? The reason is that the UK is considered to be in a stronger position to repay its debts because it has economic freedom to engage in practices such as quantitative easing, and it is also better equipped through business enterprise to generate growth. Apart from Spain, Greece (€324,063,321,236), Ireland (€173,309,348,019) and Portugal (€200,413,590,289) may have relatively small government debts but their percentage ratio compared to GDP are all in excess of 100%.

The GDP debt ratio of 159.3% for Greece is one reason why the implied yield on its 10-year bonds now sits at more than 20%. Portugal and Ireland also remain above the 7% mark.

So what does this mean? Belonging to the eurozone makes countries more vulnerable because they depend on policies for the entire single currency. Hence, the disparity in 10-year bond yields between Spain and the UK.

The UK may have a far greater actual debt and debt ratio, but Spain’s financial future looks bleaker. The verdict of investors is shown by the forces that shape the government bond markets. SR