The IoD Directors’ Economic Confidence Index, which measures business leader optimism in prospects for the UK economy, rose slightly to -58 in December, up from -64 in November.

There were also slight improvements in expectations for revenue, employment, investment and in directors’ optimism for the prospects of their own organisations.

The top issue for the government to address to support business in 2023 is ‘high inflation’, with two-thirds of IoD members choosing this as one of their top priorities for government action. Directors attached far more importance to addressing ‘high inflation’ than ‘recession’, which came a poor second at 35%.

Kitty Ussher, chief economist at the Institute of Directors, said: “Confidence in the economy is still very low, but is pointing upwards into the New Year. It is hugely encouraging, in particular, that the investment plans of IoD members are a little stronger in December than at any time in the last six months.

“Business leaders consider tackling inflation to be far-and-away the most important thing government can do to help them going into 2023.

”But with around half our members also expecting inflation to have peaked by the Spring (if not before) it’s also important to make rapid progress on underlying structural issues such as skills shortages, our relationship with the EU, the cost of energy, as well as ensuring the economy returns to growth as soon as possible.

“It’s customary to wish for a peaceful New Year. Given the upheaval of the last few months, business leaders will be no exception in hoping for as much stability as possible to enable them to plan.”

The IoD Directors’ Economic Confidence Index measures the net positive answers from members of the Institute of Directors to the question ‘How optimistic are you about the wider UK economy over the next 12 months?’ on a five-point scale from ‘very optimistic’ to ‘very pessimistic’. 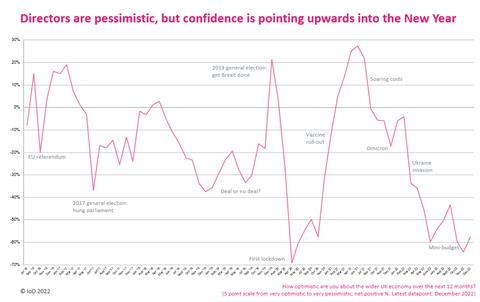