’ESG reputation could become as important as product, service and price’ for insurers

The climate debate pitched up on the insurance industry’s front door, literally, in April when Extinction Rebellion activists blockaded the entrance of Lloyd’s of London.

The hardcore environmental campaign’s latest high-profile stunt was a protest against the insurance industry’s continuing support for the fossil fuels industry.

Of course, the industry has been taking this issue more seriously for years. Lloyd’s itself, which reverted to remote working on the day of the protest, has told its members that they must stop insuring coal mining by 2030.

Climate change was also rated as the third biggest corporate risk over the next 12 months and beyond by UK respondents to the latest annual Allianz Risk Barometer, which was published in January this year.

However, the pressure that the insurance industry is really concerned about comes not from campaigners, but the courts.

“Climate action groups are mobilising. It just takes one to break and we will have a precedent,” she says.

Such actions are already having an impact on corporate behaviour. In 2019, the environmental activist law practice ClientEarth filed a complaint against BP alleging that the oil giant’s advertising campaign misled the public in the way it presented BP’s low-carbon energy activities. BP subsequently withdrew the controversial campaign.

This case illustrates how even being perceived to be on the wrong end of the climate debate is an increasingly bad look reputation-wise, especially in the eyes of younger and more eco-minded consumers. 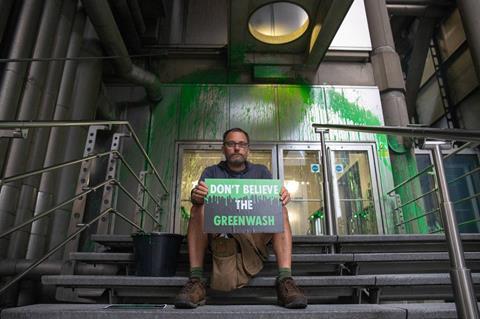 This matters for businesses’ bottom lines, with intangible assets making up an increasing share of their value, says Newberry.

Reputation and brand were identified as the most important of these intangible assets in a report published by Lloyd’s and KPMG in August 2020.

Companies are worried about being stung on environmental, social and governance (ESG) issues generally, says Newberry, who notes that such concerns are sharpened in relation to climate change, where the regulatory framework is “most advanced”.

“Companies in the spotlight are increasingly aware of the risks around corporate behaviour if they are not up to scratch,” she says.

Catherine Dixon, chief underwriting officer at Allianz Commercial, says: “Reputations are built on many factors and there is no doubt that ESG initiatives have moved from ‘nice to haves’ to crucial business strategies. As much as it is an emerging opportunity, it is also a risk.

“With reporting imminent, ESG reputation could become as important as product, service and price.”

Insurers have, of course, had a first-hand taste of how this focus on ESG works in practice.

Along with banks, insurers have been obliged by the Prudential Regulation Authority since 2019 to identify a senior figure or figures who is responsible for identifying and managing climate change risks.

Under this regime, senior managers will be held personally accountable for governance failures relating to the financial consequences of climate change, meaning they will be vulnerable if the company is found not to have taken appropriate steps.

These requirements have been reinforced by the launch of the UK Transition Plan Taskforce in late April, which will oblige financial institutions and other companies to prepare rigorous plans to achieve net zero, says Dixon.

Therefore, company directors could find themselves on the hook when, or if, environmental and social shortcomings lead to a drop in shareholders’ value, which will have implications for directors and officers policies.

“More and more directors and officers claims are likely to be driven by environmental, social and governance factors, which have the potential to substantially impact the reputation of a company,” said AGCS in a report on insurance trends published in December 2020.

Concerns surrounding ESG will become “increasingly prevalent” in the directors and officers market, according to Gallagher’s state of the market report published at the beginning of this year, with knock-on impacts on pricing levels.

Increased focus on ESG means insurers are taking a ‘more guarded approach’ to these policies, such as seeking more information on a company’s current and future strategies in terms of such issues, according to a blog published by broker Lockton in February.

Given that the ESG impacts on directors and officers insurance is mostly related to reputational risk, boards should demonstrate they have clear oversight of these issues, pre-emptively addressing major supply chain, labour, or environmental issues, it adds.

Existing directors and officers policies may offer assistance, usually after an event has happened that can be tied to a drop in shareholder value triggered by shortcomings related to ESG obligations, says Newberry.

Her practice is leading a government backed innovation project on developing software that seeks to head off problems by identifying and assessing reputational risks for companies.

Providing this real time information will bolster insurers’ due diligence for the companies they cover, while providing an “early warning tool” for firms that can’t afford big PR teams or cannot wait until they have suffered a loss, says Newberry.

From the point of view of the insurers, she sees renewed appetite for providing stand-alone reputation cover.

Hoe Yoeng Loke, head of research at Airmic, welcomes this kind of innovation from the insurance industry.

He says: “For a long time, reputation insurance coverage had primarily focused on compensating direct expenses related to mitigating the harm after a reputational event, but did not always cover the full cost of the event itself.

“Because no single reputation insurance product currently can fulfil every organisation’s needs, the markets are being responsive and innovative in trying to find solutions to the need for reputational risk financing.”