Hydraulic fracturing continues to spread rapidly across the globe as a popular method of natural gas extraction. But there are mounting concerns about its contribution to groundwater pollution and long-term environmental impact 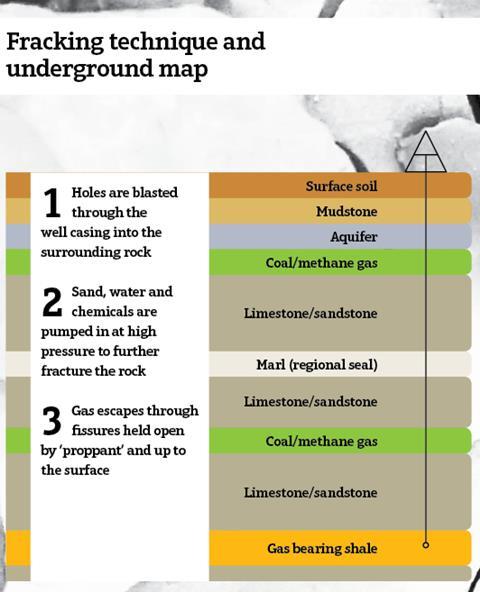 In December 2011, the USA Environmental Protection Agency (EPA) released a draft report of its investigation into an aquifer in Wyoming that was polluted in 2008. It concluded that “the best explanation” was that fluids from underground hydraulic fracturing had migrated from operations and contaminated the aquifer. “The presence of these compounds is consistent with migration from areas of gas production,” it said.

The draft report failed to state definitively that fracking led to the pollution. However, it conflicted with claims from the oil and gas industry that fracking fluids have never contaminated drinking water. In 2011, for example, ExxonMobil chief executive Rex Tillerson appeared before a USA Congressional hearing and told senators: “There have been more than one million wells hydraulically fractured in the history of the industry, and there is not one, not one, reported case of a freshwater aquifer having ever been contaminated from hydraulic fracturing.”

The EPA is currently carrying out another report into fracking, with its preliminary findings stating that “injecting large volumes of fluid into the sub-surface is not without risk”. Yet despite several ongoing studies into the possible relationship between fracking and groundwater pollution, the promotion of this method of extraction continues to spread rapidly across the globe.

Shale gas expansion
Shale gas extraction has been commonplace in the USA since 2005, after technological advances in the technique and horizontal drilling made fracking more profitable. Like wildfire, thousands of shale gas wells quickly popped up across the country, which has since experienced a massive 28% reduction in domestic natural gas prices. Shale gas now accounts for 23% of all USA natural gas production, and is expected to reach 49% by 2035.

America’s shale gas boom hasn’t gone unnoticed by the rest of the world, and analysis has revealed there are huge onshore shale gas reserves across the globe. According to Marsh energy practice risk engineer Nigel Cairns, fracking is here to stay.

“One of the reasons why fracking has become so popular is the location of where the reserves are in the world,” Cairns says. “The world is trying to make the move from oil to gas, because if you look at where the major oil supplies are in the world, they’re in countries like Iran and Saudi Arabia - regions that might be seen as not being as favourable to the West. So there is a major political aspect to it.”

In Europe, shale gas reserves are located in three major areas, which each contain multiple basins and sub-basins: from eastern Denmark to eastern Poland; from northwest England to northwest Germany; and southern England down to Switzerland. The UK alone has an estimated 5.3 trillion cubic feet of technically recoverable onshore reserves, according to the British Geological Survey, and this figure is expected to be revised substantially upwards this year, possibly to as high as 200 trillion cubic feet.

As always, there is a also a cost element involved. “Conventional operations tend to require between 40-100 days to drill each well; costs vary but, for offshore drilling, a well can cost up to $200m [€154m] to drill,” Cairns says. “Onshore conventional drilling costs, however, tend to be much lower. Unconventional wells typically take half the drilling days, and cost somewhere around the $10m mark. So certainly in the drilling phase, shale gas looks to have attractive economics.”

European concerns
Despite European gas prices being more than double those in the USA, the continent has shown much greater reticence to embracing fracking. There are numerous non-government and civil society organisations across Europe campaigning against shale gas extraction and production; moratoriums are in place in the Czech Republic and Romania; and the practice has been banned by governments in Bulgaria and France, with both expressing concerns over immediate and long-term pollution.

Fracking operations were suspended for 12 months in the UK from June 2011 after two earthquakes - measuring 2.3 and 1.5 on the Richter scale - struck along a fault line at Presse Hill in Lancashire, close to where UK energy company Caudrilla Resources was fracking for shale gas. A Department for Energy and Climate Change report later found that “the earthquake activity was caused by direct fluid injection into an adjacent fault zone during the treatments”, but, crucially, it said fracking could resume in the UK, albeit with stronger controls.

Fracking fluid
Between 3,000-20,000 cubic metres of water are used during a multi-stage fracturing process. Some 20%-50% of this remains underground, usually bound to clays in the shale rock. But water is just one ingredient of the ‘fracking fluid’ that gets pumped at very high pressure into underground shale deposits.

Sand or ceramic beads, known as proppant, are mixed with water to make up 99% of a typical fracturing fluid. The other 1% are chemicals that give the fluid the properties needed for fracturing. Although a small percentage, this averages about 300 cubic metres of chemicals per typical fracking operation.

Advocates of fracking, like ExxonMobile’s Tillerson, insist that the technique takes place so far underground (typically 6,000ft-8,000ft) it is impossible for the fracking fluid to ever migrate upwards and pollute underground aquifers. According to British Hydrogeological Society president Bob Sergent, however, there is no guarantee of this: “You can minimise the risk, but you can’t be totally certain. There are groundwater paths from great depths up to the surface, and so just because the fracking may be taking place deep underground doesn’t necessarily mean there isn’t groundwater in the connection to the surface.”

Sergent also warns that such a vast amount of fluid may lead to “the lubrication of rocks, which would lead to minor seismic events”. While fracking proponents are fast to point out the small scale of these earthquakes and their next to non-existent effects at surface-level, Sergent says that such activity has the potential to open new faults and underground pathways for fracking fluid to migrate up or along.

A recent report for the EU warned that more stringent regulation is needed for hydraulic fracturing, stating that the technique carries a number of “high risks”. Highest among these was the potential for water contamination, with the report noting “more than 1000 complaints of drinking water contamination” have been documented in the USA and citing numerous instances of “violations of state oil and gas laws during drilling operation[s]”. Importantly, it recommended fracking should not be permitted in, and around, areas where water is used for drinking purposes.

Legacy
While there are immediate and medium-term risks associated with fracking, many anti-fracking organisations are concerned about the longer-term legacy that a fracking revolution could have. A spokesman for Friends of the Earth Europe told StrategicRISK: “Shale gas is a carbon-intensive fossil fuel that risks locking Europe into continued dependency on fossil fuels for decades, rather than bringing about the decarbonisation of our energy system we urgently need.”

This argument is supported by International Energy Agency chief economist Fatih Birol, who told a conference in May: “Renewable energy may be the victim of cheap gas prices ifgovernments do not stick to their renewable support schemes.”

Ongoing drilling in the Arctic Circle is evidence that continued fossil fuel dependency will force energy companies to seek more complex and invasive measures of extracting hydrocarbons from the ground. A European shale gas revolution could provide 20-50 years of cheaper gas prices for the continent, but is that worth potentially putting the health of local communities and the environment at risk?