But experts concerned about risks of illegal drilling 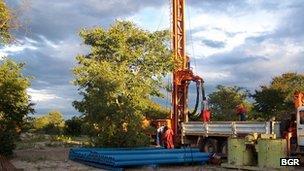 A 10,000-year-old aquifer discovered in Namibia could provide the north of the African country with water for another 400 years.

Despite the age of the source, scientists insist that it is suitable for drinking, and may even be cleaner than modern supplies.

However, experts are concerned that illegal drilling may contaminate the supply.

Ohangwena II, as it has been called, lies beneath both Namibia and Angola, and covers an area of more than 1000 square miles on the Namibian side of the border. However, the aquifer lies directly under a smaller salt aquifer, and scientists fear that illegal drilling could connect the two and contaminate the fresh water supply beneath.

“If people don’t comply with our technical recommendations they might create a hydraulic shortcut between the two aquifers which might lead to the salty water from the upper one contaminating the deep one or vice versa,” said Martin Quinger from the German federal institute for geoscience and natural resources (BGR).

Namibia’s water supply currently comes from just two rivers, and this has restricted agricultural development to only those areas within close vicinity of the supply. However, if managed properly, the discovery could transform farming and development in Namibia – the driest country in sub-Saharan Africa.

“For the rural water supply the water will be well suited for irrigation and stock watering,” said Mr. Quinger, adding that “the possibilities that we open with this alternative resource are quite massive.”

Researchers also believe that the aquifer could help people deal with the effects of climate change, and acts as a buffer to drought in the region. However, concerns remain over the risk that illegal attempts to access the supply could pose.

The discovery comes in the wake of the revelation in April this year that Africa was sitting on top of huge sources of underground water.

Could the discovery of more aquifiers herald greater propsperity in Africa?

Have your say on this story using the comment box below.