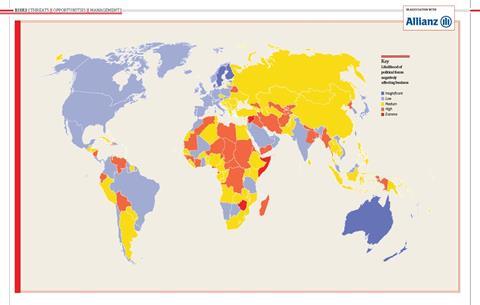 The last 12 months have been characterised by political fluctuations in many parts of the globe. Civil unrest in the Arab world has probably resonated loudest. A lynchpin in the world economy because of its oil and gas reserves, peace in the Middle East, sadly rare, is crucial to maintaining stable energy prices.

A recent briefing by Aegis Advisory says rising instability in the Arab nations is aff ecting the risk exposures of businesses worldwide in two main ways. It is hitting energy prices by creating chronic uncertainty. It is also demonstrating the usefulness of social media, such as Twitter and Facebook, to co-ordinate protests and political activity. Social media has played a part in political unrest from Chile and the USA to Spain, Italy, Greece and the UK.

But mass protest is not confi ned to the dictatorial regimes of the Middle East and North Africa. Across Europe the people are rising up in protest against both the failure of the ruling powers to restrain the excesses of a capitalist system gone mad as well as the austerity measures implemented in response to these failures. In Europe, actions to remedy national financial problems, largely stemming from bank bailouts, are likely to spark further protests and riots.

Greece is expected to make further spending cuts as a condition of its bail-out package from the EU and IMF. Its October strikes and work stoppages in reaction to austerity measures could well be followed by more of the violent protests that began in May.

The same could be true in other European countries as governments fi ght against a return to recession. The French finance minister announced austerity measures in September. The UK chancellor of the Exchequer has pledged to continue the country’s fiscal squeeze, despite unemployment hitting a 15-year high. Spain and, to a lesser extent, Italy have seen protests against cuts.

In contrast to the Middle East, these popular movements are unlikely to lead to wholesale political upheaval or revolution - Western political institutions tend to be fairly responsive and temper the revolutionary spirit.