Risk managers must lead in a changing world: The StrategicRISK 100 Risk Retreat tackled failing democracy, the shift in economic power to the East, cyber threats, and the need to give something back 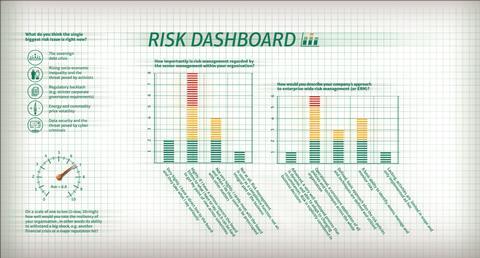 Risk managers should lead the drive for corporations to react to changes in political and economic pressures, as well as tackling emerging and potentially very costly cyber risks. These were among the key messages delivered at the StrategicRISK Risk Retreat in November.

Julian Radcliffe, OBE, a founder of Control Risks, opened the panel debate by saying that democracy is clearly failing. “Countries like China are struggling to move to a semi-democratic system, while democracy has failed dramatically in some countries in southern Europe,” he said. “As a result, such countries are calling for technocratic leaders with no obvious political bias to save them from ignorant politicians with a stupid voting record.”

Coupled with political uncertainties is the huge shift in global economic influence to the Far East. Radcliffe said that India and China could become the world leaders in the same way that the USA and Russia dominated in the past. He did not believe that the result would be open warfare because of the existence of the nuclear deterrent, “but smaller conflicts will escalate and crime will increase”, he predicted.

With government spending under pressure, public services in sectors like health, education, transport, policing and defence will be heavily constricted. Radcliffe considered that the corporate sector is in a very strong position to step in.

“Those of us who have a key interest in aspects such as fraud and patent protection and cyber security cannot rely on government doing much for us. Already insurers are funding payment of over 50 policemen to tackle stolen construction equipment and fraud,” he explained. “Risk managers should take a significant lead, working together to identify relevant areas for partnerships with the public sector.”

Similarly, large corporations should require their employees as individuals to contribute to their communities. “It would be good if every individual’s career appraisal included a section on what they had done to support the wider corporate responsibility to society,” he suggested.

“I would like to see more public/private partnerships, with risk managers taking the lead, and companies enabling their employees to put more into society so that it moves in the right way with the right calibre of people,” he concluded.

Despite western problems, he expected the global economy to continue to grow, although recently most of this growth has occurred in the emerging economies. “In Asia, Africa, the Middle East and South America, rapid growth in population and a very significant improvement in the institutional governance structure in many of these regions is being followed by rapid productivity growth and an increase in standards of living,” he said.

Companies have become more dependent on IT and connected electronic devices for everything they do, which has raised the stakes for all of us’

The result will be considerably increased pressure on resources. For example, in China current annual oil consumption per capita is about two barrels, compared to around 12 barrels in Europe and 22 in the USA. There are around 45 vehicles per 1,000 people in China, compared to 650 in Europe and 850 in the USA. As rising living standards allow the emerging economies’ consumption to catch up with that of their western counterparts, Callow predicts huge pressure on resources, particularly food and energy.

In other countries, demographic concerns are very different. “For example, in Europe our population is likely to be quite static but the number of people over 65 is growing substantially, with the working population reducing by a similar figure. This will result in a large transformation in society,” Callow warned.

Recent events have also demonstrated the importance of financial market trends on the economy. “Equity market valuation accounts for a large share of GDP and recent price fluctuations have had a considerable impact on investors’ confidence,” Callow said. “And developments in financial markets and economies are very synchronised now because of the effects of rapid communication through IT.”

He also discussed the problems arising from recent rapid expansion in debt in Europe and the USA, both in private and public sectors. While the private sector in the last two years has taken steps to deleverage and reduce the amount of debt in relation to income, public sector debt is still generally rising and thus increasing the overall growth of debt.

He pointed out: “Companies have become more dependent on IT and connected electronic devices for everything they do, which has raised the stakes for all of us. If something goes wrong, it has a bigger effect than before - and our adversaries also recognise that targeting our IT systems has become a more effective way of achieving their objectives.”

Cyber risks are enhanced by the fact that the cyber environment differs from others; it is not defined by geographical borders. “Information flows seamlessly between countries and individuals and businesses are right in the front line,” Harrison said.

Forms of cyber crime are many

The known ‘traditional’ cyber risks of credit card fraud, viruses and other malware
This can lead to business disruption and financial loss.

Activists targeting specific sites to cause disruption, financial loss, brand and reputational damage
In some cases, this can threaten the viability of the online business concerned.

Cyber warfare and cyber terrorism
There have been a few examples, most notable recently being the Stuxnet worm. Cyber terrorism is also a concern, but is as yet hypothetical.

Cyber espionage
This involves theft of commercially sensitive information, with some incidents being reported by the chemical, oil and gas industries in particular.Harrison said that most incidents of cyber espionage are either not detected or not reported. “A large volume of cyber espionage is occurring. Potentially the consequential business loss for companies both in the short term and from loss of future revenues dwarfs the cost of all the other cyber risks,” he said.