Risk Financing: Pressure from all sides 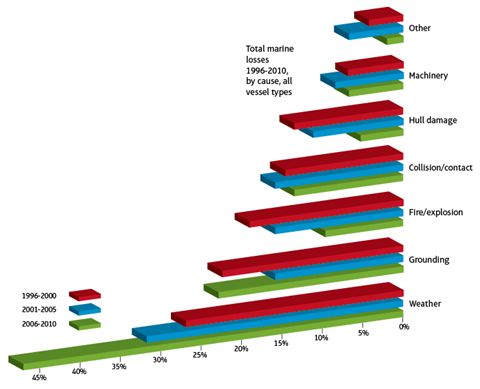 It has not been a good year so far for marine and cargo insurers. Hit by natural catastrophes around the world - including the magnitude 9.0 Japan earthquake and tsunami on 11 March - loss ratios have begun creeping up. Yet the market remains wildly competitive, with new capacity conspiring to exert downward pressure on premium rates in what is already a very soft market.

“It’s been a shocking year for cat events but so far that hasn’t translated into a significant hardening of rates or even rate increases within the cargo market, except on limited occasions where you’ve got stock in a known high-cat area,” says Chartis International vice-president of global marine cargo Jonathan Eaton. “Overall rates are at best flat, but in reality if it’s a profitable piece of business from an underwriting standpoint, there’s still downward pressure on rates.”

The Japan event, February’s earthquake in Christchurch, the flooding in Queensland and severe weather in the US are adding up to significant claims for the insurance industry - with reported estimates of about $60bn (€43.5bn). How much of this falls to the marine and cargo market is uncertain, but there will be losses.

According to cat modelling agency RMS, while there were initial estimates of at least 10 ocean-going ships considered total hull losses in the tsunami, with a total insured value between €145m and €218m, some were eventually located adrift. Other significant losses in the marine sector are cargo coverages, with thousands of 20ft equivalent units (containers) smashed and inundated by the tsunami or washed away at Sendai Port. Large quantities of stock were also spoiled by salt water inundation or while they were stuck in warehouses at port level.

Overall, the impact on industry capital at a time when investment returns are low suggests underwriters will be under more pressure to make a profit going forward.

“There is definitely an upward pressure from insurers, but for the most part we’re managing to stay where we are on renewals,” says Lockton divisional director for risk solutions, cargo and logistics, Graham Hambly.

An oversupply of vessels in a sluggish global economy remains a concern, but orders have picked up for bulk carriers, tankers and containers, with China the source of 41% of the demand. While import and export activity has picked up as the global economy emerges from financial crisis, earnings are still lower than the last peak in 2008 (International Union of Marine Insurance, IUMI).

Any new business in the market is aggressively fought over, says Eaton. “Most noticeable in cargo is an increase in activity on project cargo risks as finance has come back for some projects that have been mothballed,” he says. “We’ve seen an increased number of projects recommencing, so that’s a positive trend. But that business, which is very much on target for us, is subject to the same overcapacity, so we’ve seen quite a violent decrease in rating and widening in terms for good-quality business.”

The continued increase in global cargo underwriting capacity has created a competitive buyer’s market, according to Gallagher London. In its February 2011 marine newsletter it comments: “Trade volumes and commodity prices are increasing in most sectors, which will increase clients’ turnovers and put pressure on underwriters to reduce rates further. These increases in volume will likely increase claims activity, with insurers’ margins diminishing. To moderate this potential for reduced margins, underwriters and brokers will be looking to work with clients to establish and incorporate effective risk management solutions.”

One concern is that in such a soft market insurers could be tempted to take a harder stance on claims. The industry needs
to work together to ensure a high level of professionalism is maintained, thinks Eaton. Finding new ways of gaining efficiency in the market is also to everyone’s benefit, and initiatives such as electronic endorsements can help achieve that.

From a cargo perspective, one significant impact of this year’s catastrophes - including the Arab Spring unrest throughout North Africa and the Middle East - is the impact on supply chains. Spikes in the price of coal and steel were experienced when the mining sector in Queensland’s Bowen Basin was unable to get its product to port, while in the USA car manufacturers and the electronics industry experienced a slowdown in activity after the Japan earthquake.

“The earthquake in New Zealand, tsunami and floods in Australia have had an impact on the cargo market,” says Hambly. “Not only have you got goods held at ports and in transit in those places, it’s increasingly the case that goods are insured throughout the supply chain - from the time the goods are manufactured and produced through to the end customer - known as stock throughput insurance.”

While trade disruption covers are available in the market - and contingent business interruption if a client is heavily reliant on one key supplier, for instance - trying to bring new products to market and encourage additional premium spend is not easy in the current climate. Delay cover can be put back into policies where it has been excluded, but again that requires additional premium.

“There’s increased awareness of other products that fall under the heading of marine - trade disruption is one. The other side of this is finding a market for that in the sense that risk managers are increasingly price conscious, especially when margins in their own organisations have been cut to the bone,” says Eaton.

In the first half of 2011 the number of pirate attacks on ships around the world reached 266 (up from 196 attacks in H1 2010, according to the International Maritime Bureau). Ransoms are increasing, with the average thought to be about $4m (€2.9m), and there have been tales of growing violence on board hijacked vessels. According to Ole Wikborg, the Norwegian president of IUMI, piracy problems in the Gulf of Aden and the Indian Ocean are “an absolutely unacceptable disruption of global trade to which marine insurers must respond”.

In addition to increased capacity for specialist kidnap and ransom (K&R) covers, marine and cargo insurers have been doing their utmost to mitigate the financial losses resulting from piracy, helping in negotiations with pirates and to provide their proportion of ransoms demanded to release crews.

“The first thing they want to know is whether piracy is covered under a cargo policy,” says Hambly. “The problem is that when goods are taken by pirates, technically they’re not lost and damaged - they know where they are - so you have a situation where cargo insurers tend not to pay the claim straightaway as there’s a good chance of getting them back.

“With ransoms paid, generally vessels are returned in three or four months,” he continues. “The problem we’ve encountered is that when you’re dealing with something that is time-sensitive or goods that deteriorate or commodities subject to price fluctuations, the delay of two or three months could leave you with a substantial loss that wouldn’t necessarily be covered under a conventional cargo policy. We’ve been trying to put together some vehicle that will pay for loss of income from the piracy act.”

While piracy is undoubtedly a concern for insureds, Eaton urges them to keep a sense of perspective. “While it’s high profile and gets a lot of press, the actual number of hijacks when you look at total volume of shipping is relatively small, but they are significant nonetheless and the average cost of ransoms is going up,” he says.