The renewable energy industry is booming, but many insurers are reluctant to underwrite much-needed key projects

With an estimated $211bn invested in renewable energy last year (according to the UN Environment Programme) – a 32% rise on the $160bn invested in 2009 – the sector is attracting huge attention around the world. Further growth is anticipated this year, with government funding and the falling cost of renewable technology driving the development of large-scale renewable projects, including offshore wind and solar thermal power.

Yet despite the phenomenal growth, the renewable energy sector continues to face numerous challenges, not least of which is securing insurance coverage. Many carriers – particularly the more traditional construction and energy underwriters – remain reluctant to provide insurance for manufacturers and products that do not have an established track record. While premium rates across the renewable sector in general have been reducing, a spate of claims in the offshore energy market has caused some insurers to pull back their capacity.

However, insurance capacity for the renewable energy sector – including a number of specialist underwriters – continues to grow and cover is widely available and affordable for more mature technology, such as onshore wind and solar PV.

Innovative products have been released, and some risk has been transferred to the capital markets or self-insured through captive insurers. “There are some insurers that will pick up the extended warranty technology performance risks, Munich Re and Swiss Re being two. These products can be structured as either insurance, financial lines (surety and performance bonding) or a mixture of the two,” says James Green, renewable energy practice leader at JLT Specialty. “But only the largest (re)insurers with sound financial ratings can offer products like that, because they’re putting their capital at risk for up to 25 years.”

The biggest values-at-risk at present are for offshore wind and solar thermal, where there are some sizable projects in the pipeline. Solar thermal power stations are being developed in many of the world’s deserts including the Desertec initiative – an incredible $555bn bid to develop concentrated solar power (CSP) in Europe, the Middle East and North Afria. For offshore wind development, while the UK and Denmark have led the way (holding a 44% and 30% market share within Europe), mega-projects are planned off the coasts of China, Hong Kong and northeast USA among others. 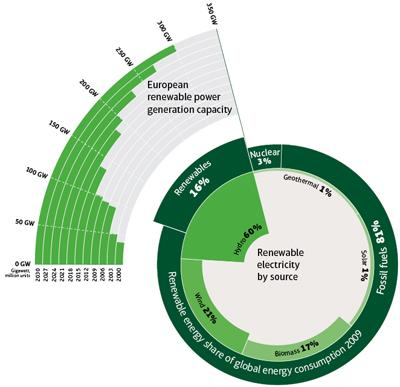 Many of the risks associated with offshore wind occur in the construction phase, where hundreds of kilometres of cables need to be laid along the sea bed. “The offshore wind insurance sector is more limited, with only a handful of experienced lead insurers with an appetite to insure the projects,” Halperin-Smith says.

“It is well documented that cables claims are the most frequent in offshore wind, yet still they occur in almost all projects,” he continues. “There are encouraging signs that this is being addressed, such as recently at the Ormonde project [in Northwest England] where they successfully laid and buried in one uninterrupted operation the 42km export without any joints, which is probably a UK first.”

However, cable claims continue to occur and the limited number of cabling vessels and experienced cable contractors means they can cost millions of pounds. “Insurers are looking closely at the experience of cable-laying contractors on previous projects when considering new wind farm risks and expecting greater deductible retention on cable claims,” says Halperin-Smith.

He thinks it is important to produce workable risk management and insurance solutions. Reducing cable claims is a priority, and can be better tackled by ensuring best practice. Many insurers are now recommending that marine warranty surveyors remain on site while all the cables are laid, rather than moving on after the first job is completed as is the current practice.

In addition, the renewable industry should look to work more collaboratively to understand the exposures faced, with ideas for the offshore wind sector being posited at the recent conference. “Because the utility companies are competing against each other, they haven’t always been as open as they should be,” Green says. “But because these risks are so prevalent across the industry, especially with cables, we’re saying they should look to share spares for instance … this can help to reduce the business interruption exposure.” SR

One of the fastest developing renewable sectors is offshore wind energy, with the UK currently the global leader. The UK government plans to create 25GW of new energy generation capacity through the Crown Estates' Round 3 offshore wind farm programme (compared to the 8GW generated by earlier Round 1 and 2 projects).

Nine offshore projects are already operational in the UK, with a combined capacity of 688MW from 228 turbines. A further 1156MW is under construction. "Five to six years ago you were seeing 100MW projects and you're now talking about 1GW plus projects," says JLT Specialty's James Green.

Probably the best-known project is the London Array, a wind farm 20km off the coast from the mouth of the River Thames.
Phase one of this joint venture between renewable energy firms E.ON, Dong Energy and Masdar is due to be completed in 2012.

When fully operational, the 341 turbines covering an area of 230 sq km will provide up to 1GW of electricity.
It is understood that the commercial insurance market has taken on at least 50% of the exposure for the wind park, with one insurer offering all the Euro2bn of construction cover needed.