Global disasters, growing inequality and a depletion of natural resources are catalysing tensions between nations. Are risk managers fully prepared for the consequences?

The last three years’ plethora of unforeseen disasters – financial, political, climatic – has given rise to a millenarian breed of prophets seeking out the next great unforeseen crisis that might shake the planet.

Economist Raghuram Rajan led the way last year with his tome Fault Lines, in which he argues that the credit crunch evolved from structural flaws in the US economy, warning that a potentially more devastating crisis awaits us if they are not fixed.

He claims America’s growing inequality and thin social safety net create dangerous pressures to encourage easy credit and keep job creation robust, highlighting that the US financial sector has become the critical but unstable link between an over-stimulated America and an under-consuming world.

As the financial crisis still works itself out – and with critical sovereign debt issues hampering the European area – such theories gain traction.

Risk analysts Eurasia Group president Ian Bremmer says that the slow creep back to growth fails to compensate for the fact that we are living in the ‘G-Zero’ and “2011 looks to be the year that our understanding of how the world works becomes out of date”. 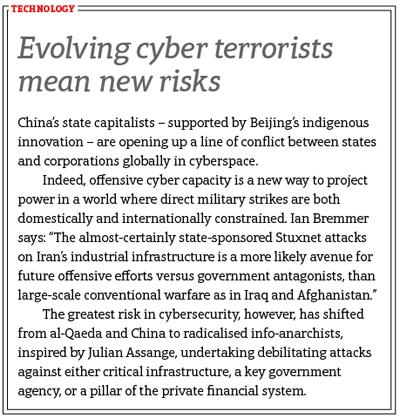 A reference to the G20 group of nations – and their inability to respond effectively to the crisis – the G-Zero is Bremmer’s name for a time in which “the key institutions that provide global governance [such as the International Monetary Fund (IMF) and World Bank] become arenas not for collaboration but for confrontation”.

He believes that the result will be political posturing at best and, at worst, more conflict. Europe is showing the way, according to this theory. Rifts are developing despite its political maturity – witness the current tussle between Germany and Greece over the potential default on Greek sovereign debt. As geopolitics takes on an increasingly geoeconomic hue, Bremmer believes “all the G20’s pledges to ‘avoid the mistakes of the past’ will not prevent the G-Zero from taking hold and sparking other forms of conflict”.

Crisis on a global scale

Europe is only one of a long list of regions where the next crisis could appear, however, G-Zero or otherwise.

This year has spawned unforeseen revolutions in Tunisia and Egypt, continuing war in Libya, and violence in Syria and Yemen. The Israel-Palestine issue has taken a break from the front pages, but remains an unlanced boil.

Should the Arab spring have been foreseen, however? According to Control Risks senior global issues analyst

Jonathan Wood, the underlying features of these revolts give important clues and show where the pressure will lie in the future. “In these countries, there is a high demographic pressure, a large and growing younger male unskilled population and growth in economic demand.”

He says that the intrinsic conservatism of these cultures – incapable of absorbing highly skilled female labour into the workforce – creates bottlenecks. These are feeding into “the biggest change since the collapse of the Ottoman Empire”.

Demographics, whether of energy resources or particularly of labour, are key elements of predicting the next problem. OECD secretary-general Angel Gurría says that income and earnings inequality has been on the rise over the past two decades in most OECD countries and emerging economies.

He warns: “If in the decade of the strongest economic expansion inequality increased, what will happen now? What will we do with long-term unemployment and youth unemployment? Halting the scary outlook of increasing inequality is more urgent than ever.” 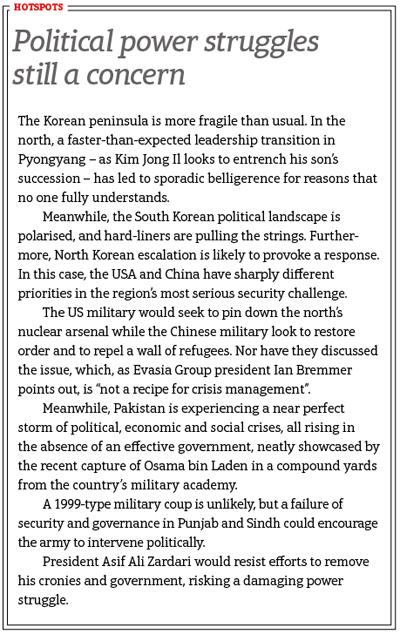 Although political risks remain at the fore perhaps the greatest unknown, and the largest constellation of risks, relates to the Chinese pattern of export growth at twice the rate of economic growth, with resulting large current account surpluses.

This will continue to be the object of international outcry as the world’s second largest exporter continues to pump out goods in a demand-constrained world economy. A wall of money, driven by expectations of higher long-term growth rates – chiefly in China – is headed into emerging markets and developing economies. This trend is generating upward currency pressure on those economies open to capital inflows, hurting domestic firms by making exports more expensive and intensifying import competition.

In response, policymakers in many nations have turned toward currency management in the form of direct market interventions to protect local players. Governments have begun to look more seriously at capital controls as a way to counter appreciation. Brazil, South Korea and Taiwan have already signalled their intention to move in this direction. Other countries thought likely to enact capital controls should appreciation pressures continue are Colombia, Malaysia, Peru and Thailand.

Another risk that looms over China – without being restricted to it – is the growing conflict between government-supported economic entities and multinational corporations in cyberspace.

However, the most intriguing and worrying risk unites the two most restive zones in the world: the Middle East and China. Control Risks research director Michael Denison points out that in the north of China, an aquifer supplying a large chunk of the country is rapidly depleting, and last year the chief water-supplying aquifer of Saudi Arabia dried up. “Saudi went from a net exporter of wheat last year to a net importer this year,” Denison says.

As risks from cyber security and the politics of the G-Zero era become more complex, the next shock awaiting us is perhaps the most simple: our inability to feed and water the planet. SR