As the pressure builds to achieve a net-zero carbon economy by 2050, the role of renewable energy sources is growing ever more important

Indeed, without sustainable and affordable alternatives the transition away from carbon-based power is set for failure.

Despite this, conventional wind turbines have courted controversy due to noise levels and the impact on surrounding wildlife. But now, Agile Wind Power has developed a new kind of mega-watt-class wind power – named Vertical Sky – that overcomes many of the traditional barriers to widespread adoption of wind energy solutions.

One of the main differentiators of this new technology is the massive reduction of noise levels - Vertical Sky is about three times quieter than traditional wind turbines.

For example, according to the World Health Organisation, continuous noise must be kept below 45 decibels to avoid causing health issues. With most wind turbines, you need a distance of at least 300 metres for the noise levels to drop within WHO guidelines, however with Vertical Sky the noise level is below 45 decibels from as little as 54 metres out.

This is great news from a noise pollution perspective, but it also means that wind solutions can be used more widely, including across more urban locations.

Thomas Andernach, head property & specialty, Germany and Austria at Swiss Re Corporate Solutions said: “There is only 2 per cent of all Germany where you have room to install wind turbines, largely due to noise and visibility factors. This means that what most producers are doing is going all the way out to the sea to install offshore wind in order to produce the level of energy we need.

“With Agile Wind Power’s noise and visibility reduction means that as much as five or six per cent of Germany could be able to produce wind and that’s a real advantage. You should see similar increases across the whole of Europe.” 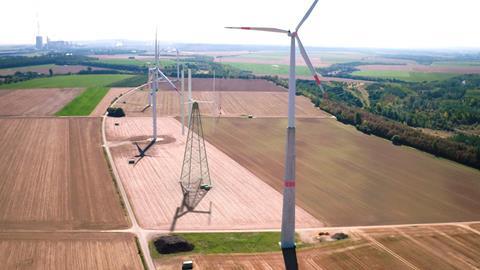 Agile Wind Power has also come up with a solution that protects local wildlife including birds and bats, a key issue for many environmental campaigners. Furthermore, its turbines are able to provide energy on an industrial scale.

Patrick Richter, CEO of Agile Wind Power said: “Vertical Sky is industrial scale wind energy, that means turbines are big enough to produce power economically for energy intensive applications and our products meets the certification requirements and are developed for the reliable use over a minimum of 25 years.

“When you look at the increasing use of renewable energy, that requires greater decentralisation of the energy industry. Only with a higher amount of local electricity production can the security of supply be guaranteed in the future.

“To achieve this, power generation plants will move closer to the consumer in the future and we already see this, for example, with all this solar installation on the rooftops. There is an increasing need for clean wind power technology which can be used in the vicinity of populated areas and in an environmentally friendly manner and that is our technology.”

Clearly, new innovations in the renewable energy sector are mission critical for achieving net-zero and Agile Wind Power’s turbines have the potential to transform the sector – with 70 turbines already in the pipeline of potential projects.

But that doesn’t mean everything has always been a breeze, and Richter points to regulation, trust, reputation and financing as hurdles that the company has overcome. He also says that insurance has played a significant role in helping to overcome some of the challenges in getting the pioneering technologies off of the ground.

“We needed to work closely with an insurance partner that really understands the business and that helped us to find a good solution for the prototype and I’m sure that we will find solutions for our customers as well.”