The death of Osama Bin Laden, who was killed by Navy Seals in a daring raid in Pakistan on May 2, 2011, could increase the likelihood of further international terrorist attacks 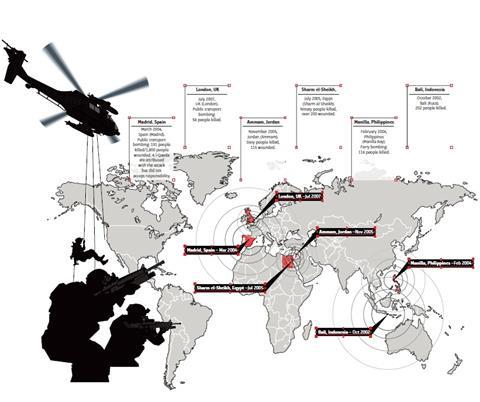 India, the Philippines, the UK and the USA are all on high alert and a global travel advisory has been put in place. The death of Bin Laden is a symbolic victory for the US. However, al Qaeda’s cell structure means it is a highly decentralised organisation, meaning it won’t stop planning attacks even after the death of its figure head.

al Qaeda confirmed the death of Bin Laden in a statement posted on various Jihadist websites warning that his death would be avenged and the group would continue in their war against the US and its allies.

In the statement, al Qaeda also claimed that it would soon broadcast a recording of Bin Laden that was made one week before his death. This recording is reportedly of Bin Laden “sharing with the Islamic nation the joy caused by the Arab revolts” and giving advice to his followers.

The US government said that a search of Bin Laden’s compound revealed evidence of the early stages of a planned attack on the US rail network. In the short term, the risk of terror attacks has probably increased but the situation could change in the long term. The recent political revolutions in North Africa, for example, look to offer a legitimate social and political alternative to terrorism, which could damage al Qaeda’s credibility and its ability to recruit new members.

02: There have been 51 terrorist attacks inspired by or suspected of al-Qaeda since 9/11

Anna Murison, head of Global Jihad Analysis at Exclusive Analysis, explains that while al-Qaeda’s organisation and its capabilities have changed it still represents a key threat.

Following the death of Osama Bin Laden, al-Qaeda may attempt to mobilise an attack that was planned well before his death. But they may not be capable of planning and executing a new plan in a short time. Transport networks have the highest risk of being affected with aviation being the main aspirational target.

But Murison also thinks Bin Laden’s death “is likely to accelerate the fragmentation of Al Qaeda” because “there is nobody like him there to take his place.”