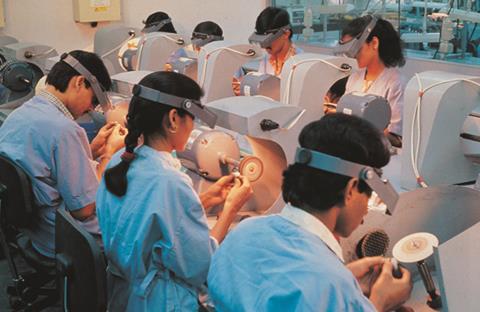 One by one, they plunged off the side of China’s Foxconn plant buildings. In terms of demographics, they were mostly male, none were older than 25 and they earnt the equivalent of $1.50 (€1.17) per hour, working 14 hour-days, seven days per week. The workers produced, among other things, iPads and iPhones for Apple. By the end of 2010, 18 employees had attempted suicide, of which 14 had died, and Apple was in the depths of its very own so-called ‘Nike moment’.

The employment aspect of supply chains has been a fraught area for almost every business since Nike’s use of cheap labour in the Far East made the headlines in the 1990s. For the first time, multinational Western businesses were being held accountable by consumers for decisions made high up in the proverbial food chain.

As the global economy continues to struggle to rebound from the fiscal crisis that began in 2007, businesses looking for ways to reduce costs could be forgiven for scutinising the labour working in their supply chains and swapping it for cheaper alternatives. However, market experts say that this is not the case, and businesses are more conscious than ever of the effect of irreversible reputation and brand damage.

Airmic chief executive John Hurrell says that although the association has not done specific work on the issue of supply chain labour, businesses seem more than aware of the importance of maintaining their reputation. However, he adds that businesses are unlikely to have a firm grasp on all aspects of complex the supply chains.

Complex supply chain
“There is a much more complex supply chain network developing for most organisations involving second-, third- and fourth-tier suppliers. Once it gets into the second tier, businesses might not know what is going on. You’d find for a component manufacturer you may have a human rights issue or whatever it may be, which you would have almost no way of discovering until the problem occurs.”

Lack of control is one of the most significant risks for any business. During the current fiscal downturn, one of the most vulnerable sectors are original equipment manufacturers, particularly in the electronic component sector, which supply ‘big box’ retailers, computer manufacturers and increasingly, the automotive industry.
Marsh global supply chain practice leader Gary Lynch believes these businesses should be acutely aware of causing reputational damage to the big players. He says: “Those are the industries that are going to be a lot quicker to change a supplier and terminate the relationship. They have crisis management to recover from the reputational risk. The penalties now are more tangible than they ever.”

In addition to reputational and brand damage, the ethical risks associated with lax scrutiny of labour could also do a company more harm than the relative pennies saved on costs. Hurrell warns: “These risks are profound and very unpredictable. What has happened is that the extension of the supply chain and outsourcing has moved faster than the ability and understanding of how you put the same oversight and controls in that process.

“Controls and oversight will improve and people will put a lot more rigor around that process. But by then the situation will be even more complex.”
To reduce the complexity of supply chains, Lynch says he has witnessed businesses increasing the velocity of the supply chain through consolidation. However, he warns that with consolidation comes more overall risk.

“In order for it to be less complex, what businesses have been doing is consolidating some of the supplier base and taking greater risk by not only consolidating facilities but also key activities in the supply chain with a smaller group of suppliers. This brings greater savings on the cost-side, but more importantly, they can really get the velocity going through their supply chain.”

One area that market experts agree has been mostly overlooked until now is cost. Lynch says labour costs need to be reviewed in a full picture of the total cost of the supply chain.

“First and foremost, depending on the industry, when businesses look at their labour costs and they look at their total cost in their supply chain, one thing that has been overlooked but is starting to catch up to them is the cost of managing risk and the cost of compliance when they have a fully distributed supply chain.”
Lynch recommends that business not only review the total cost of a supply chain, but also aggregate it over several years or cycles, rather than just year-on-year.
He says this will give businesses a more accurate comparison against their competitors.

Quality is and should remain at the forefront of any business considering cutting labour costs in respect of their supply chain, says Hurrell. “It is obviously every organisation’s responsibility to ensure they are as efficient as they can be. But that has to remain commensurate with the ability to maintain products and their brand and reputation, and therefore the value of their company.”

However, he adds that this is not the case if sacrificing quality is pricing a business out of the market. “When you are in a marketplace that counts on the lowest possible price in that market, it is a real challenge. If the only way you can operate in that market is to hold yourself to ransom, it becomes a strategic issue of whether you want to stay in that market.”

Some vindication
As for the workers of the Foxconn plant in China, the deaths of their colleagues may not have been in vain. On 18 February 2012, Foxconn announced that salaries for many workers would immediately increase by 16% to 25%, to about $400 per month, before overtime. In addition, Apple announced not-for-profit group Fair Labor Association would produce independent audits of its supplier factories in China and elsewhere. The reports are to be made public. Perhaps good things can come from bad publicity.

Ethics describes the behavioural norms and taboos of human communities. Although there is some variation in these standards of behaviour, there is also a lot we share in common. Our humanity is rooted in the moral values that help our species to procreate and nurture our young. These values, such
as love, wisdom and fairness, enable us to live and prosper within families, neighbourhoods and circles of friends. Without these values and the behaviours associated with them, our species would cease to exist, by definition, within a single lifetime.

The businesses that survive and prosper in the long term are those that put these values and behaviours at the heart of what they do. Unfortunalely, most public joint-stock corporations fail to embody moral values such as love, wisdom and fairness in the pursuit of narrow, short-term measures of ‘success’. The result is that many large businesses fail to serve their customers, care for colleagues or sustain fair relationships with suppliers. The effect is that most large quoted businesses do not prosper for very long. Compare the FTSE100 today with the FTSE100 a generation ago and this is self-evident. In the USA, the longevity of firms in the S&P500 has now declined to an average of only 18 years.

One of the most influential longitudinal studies of business success is Firms of Endearment (Wharton, 2007) by Raj Sisodia, David Wolfe and Jag Sheth. The businesses they analysed have outperformed their direct competitors by a factor of eight, by infusing the values of passion, humility and empathy into their relationships with all stakeholders, including suppliers. And these firms are not small social enterprises or co-operatives, they are iconic global brands such as BMW, Google, IKEA and Starbucks.

Prosperous, sustainable, value-adding businesses have leaders who understand that if you choose to bully, abuse, coerce or exploit the human beings in your supply chain, your integrity is compromised and at risk.

The good news is that managing ‘integrity risk’ is not a complex, sophisticated, process-driven activity. It merely requires us to bring our humanity to work.