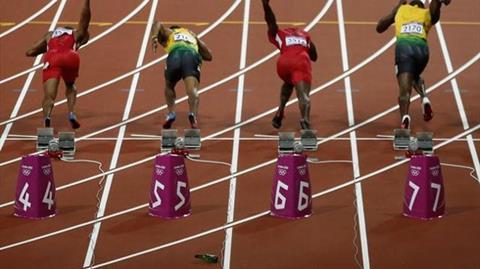 The fragility of Olympic security was highlighted on Sunday after a man was arrested for throwing a plastic bottle on to the track just seconds before the start of the men’s Olympic 100 metre final.

The bottle was thrown just after the starter said “set” and was clearly visible to hundreds of millions of TV viewers across the world. Although the bottle fell just short of the athletes it did not disrupt the race in which Usain Bolt set a new Olympic record time of 9.63 seconds.

However, bronze medallist Justin Gatlin told an interviewer that he sensed the commotion as he settled into his blocks.

“There was a little distraction and I didn’t know what it was. You could hear a pin drop,” said Gatlin. “You just have to block it out. It was a great race, one in the history books and I’m glad to be a part of it. The crowd were electrifying.”

According to Scotland Yard, the man – who held a valid ticket for the event – was arrested “on suspicion of causing a public nuisance”.

“The man had been heard to shout abuse and then throw a plastic bottle on to the track immediately prior to the start of the men’s 100 metre final. He remains in custody at an east London police station,” said a Metropolitan police spokesman.

“No one was injured during the incident and the event was not interfered with in any way,” he added.

In what Lord Seb Coe described as “poetic justice”, the man happened to be sat next to Dutch judo medallist Edith Bosch who tweeted: ‘a drunk guy threw a bottle on the track in front of me – I hit him…. Unbelievable! #angry #disrespectful’.